Sottoriva: the bread making evolution
Machinery and solutions that help the work of the bakers.

Life has changed a lot since the mechanics and technology were introduced. The human intelligence has led to the creation of tools that not only help and speed up any activity, but a few of these creations seem to get over the man himself. This is also the central theme of the exhibition “Oltre l’Uomo: da Leonardo alle biotecnologie” held at Lanificio Conte_Shed in the city of Schio (Vicenza). The exhibition is a chance of reflection on the human progress but also a chance of fun, thanks to the many interactive activities that it host. The bread making could not miss. One of the field that is most linked to the life is the world of bread, because it lives, grows, feeds, and because thanks to his cooking gives life. The mechanics in this area have ancient origins: the Romans had developed a rudimentary mixer. Over the centuries, the production techniques improved and the types of bread multiplied but the real turning point for our Country occurred in 1928 when a Royal Decree was in favor of the mechanization. Despite early resistance, it is thanks to this decree if, in Italy, there was a progressive improvement of working conditions inside the bakeries Although the second War World blocked this development, the economic boom which later involved all the productive sectors was even stronger.

What are the basic machines that today every baker needs?

• Mixers: the first were the "fork" type, which mix and knead the dough thanks to a fork. A little later, the double arms mixing machines appeared

• Divider: This machine divides bread dough into pieces of the same weight. Before it, the splitting was by hand and weight regularly was guaranteed by a long experience

• Forming: the machine work the dough to obtain finger rolls.

• Oven: up to the XIX century, the only oven was the wood oven, which was followed in the twentieth by oven fired by coal, gas or diesel. Only in recent decades, we found the electric oven that allow adapting immediately the conditions required for every single dough.

Sottoriva has created a wide range of these machines, in order to cover different needs of production. In recent years, the company has focused on developing instruments that are even more complex: plants, which produce large quantities of bread, taking care of every phase in automatic way, by managing the whole system from sophisticated software. The mechanical knowledge and its applications take the place of physical labor and leave space to the skill of the bakers. 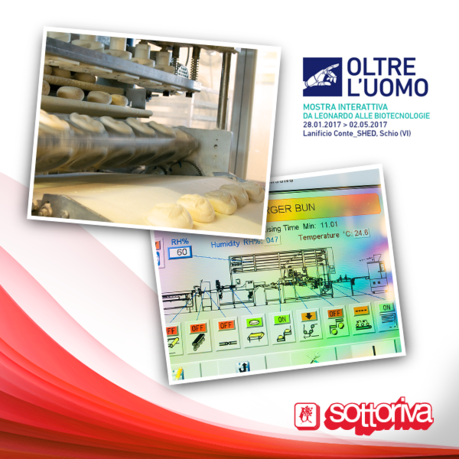